Get fresh music recommendations delivered to your inbox every Friday.

from Dimetrodon by The Doubleclicks 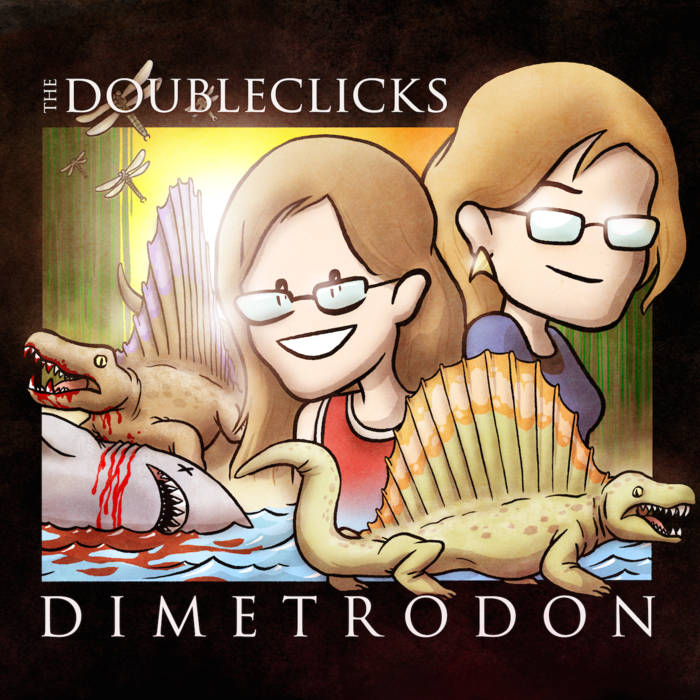 (We're gonna be on TableTop this week, so we wrote a song to celebrate.)

Yeah, your friend Wil, he’s got a beard and a show
It’s TableTop; he makes it with our buddy Bo.
We were minding our business when they called us one day—
Said, “We want you on the show! Do you wanna come play?”

Well, yes, of course, but we’ve gotta brush up
We’re behind on games and we don’t wanna look rough
How do we practice? Aubrey says: “I know,
We’ll play every game they’ve ever played on the show”

And we did. We played them, and we played them again.
And we’re ready for anything, so bring it on, friend
'Cause we know these board games from A to Z
And you can bring your best, but you won’t beat the DCs

You wanna try Tsuro? We’ll wipe the floor with you
And in Munchkin we’ll kick down a door with you
“What’s next?” it’s Get Bit by Dave Chalker
You’ll lose so many limbs that you’ll fit in a locker

You’ll want a Ticket to Ride out of this room
When we’re racking up points in Keith Baker’s Gloom
Hey, that Elder Sign’s broken; bro, can you fix it?
It should say we crushed you at Dixit

And Small World: you thought this would be fun?
Our skills are so rad, we could win in round one
You have Alhambra; did you bring Zombie Dice?
We don’t need to cheat but we won’t play nice, 'cuz

When we’re done playing Settlers of Catan
You'll forget how to pronounce "Carcassonne"
Castle Panic? That’s co-op, for us that’s a cage
We’d rather send you back to the Dragon Age

It’s a Fiasco. You can cry or Say Anything
It's the Last Night On Earth and we’re in it to a win a thing.
It’s a Pandemic. I’d Wager your Wits are weak
If you think you’re ready to step to Chez Geek.

Doubleclicks, why you doin' this
Taking a good friendship and ruining it
Man, I thought I was cool with this
Deckbuilding, role playing, and I’m rolling some dice
They made me bet all my money, and made me pledge my life

Because I showed up with Monopoly
When Angela and Aubrey gave me an instruction book and a glossary
And I guess I lost, see, that’s what they’re telling me
So never mess with the Double-C’s at the double T, it’s trouble see

There are shadows over Camelot and Tsuro in the Seas
And we are the ones with the Fortune and Glory
Takenoko time, we’ll eat your bamboo
And in Formula D, a winner’s not you

How about King of Tokyo, do you like Japan?
I think you’ll find for you, it’s a Forbidden Island
Star Wars X-Wing and Star Trek Catan
Lords of Vegas and Waterdeep, just bring it right on

'Cause in 12 Days you’ll be blabbin' Unspeakable Words
By my friends James and Mike, some of my favorite nerds
You wanna be our friend too? I don’t think that you will
When you’re getting Betrayed at the House on the Hill

So we got to the studio, time to make TV
They have lights, they’ve got cameras, and my sister and me
And we played a game! So how did it go?
I guess you’ll have to watch the episode if you wanna know

Nightmares on Wax and Bremer McCoy stop by with their sublime new LPs.