Get fresh music recommendations delivered to your inbox every Friday.

The Book was Better 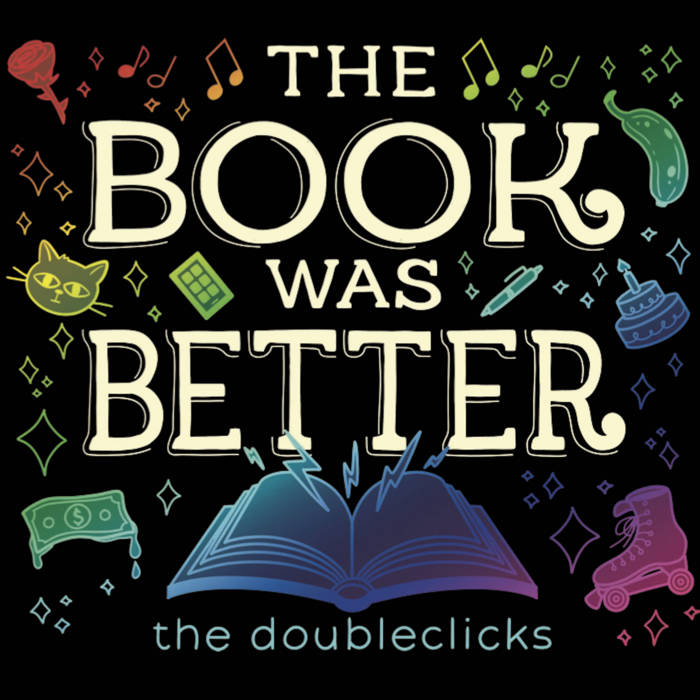 Michael Kuchlewski Funny and nerdy, but also poignant at times. Favorite track: Clifford is not too Big.

malikaithered Because the DoubleClicks make me feel happy and not alone

"The Book Was Better" is about a lot of things: gender, dogs, cats, anxiety, Halloween, and pizza are some of the things. But the big theme is this: We spend too much time yelling on the Internet, and we should all try something else. Certainly we can't stop using the Internet, that would be ridiculous. But just a tiny break sometimes, yeah — that's probably good. Go to a museum. Go roller skating and break your arm. Try to throw a birthday party and don't cancel it when you get overwhelmed at the very idea of human interaction.

It's a comedy album.

Album written, produced and performed by the Doubleclicks (Aubrey Turner and Laser Malena-Webber) and these great people:

To our mom, Suzy Webber (check out her art!!! suzywebberartist.com) for following your bliss and being a supportive and rad and hilarious mom.

To our dad, Stephen Webber, for being a huge supporter, and a role model of music, biz, and badass-ness.

To our partners Richard and Justin, who are both huge nerds and delightful humans.

To Marzipan, the cat, who is perfect.

To the Old Spaghetti Factory for being conveniently located near the studio, for when we needed a pasta break.

To the House on the Rock and Wizard Quest, which gave us an appreciation for the mechanical. To all the apps that block social media from our phones so we don’t need to wander into the ocean.

To the friends we text with who keep us moving forward: Lucia, Cary, Kate, Rachael, Alice, Katie, Shadow, Jennie, Sam and all the squads in Portland and Los Angeles.

To the people who listened to our podcast “You Should Write A Song About That,” which is where most of these songs came from. To everyone who supports us on Patreon for keeping us going and funding music videos!

Thank you to our Kickstarter supporters who made this album possible, especially executive producers Stephen Webber and David Koble.

Nightmares on Wax and Bremer McCoy stop by with their sublime new LPs.